After Makanda Ken McIntyre passed away unexpectedly in 2001, it was discovered that, in addition to the approximately 75 original compositions that appear on his albums, he had written around 350 more that had not been recorded or, in most cases, performed in public.  Makanda was a brilliant composer.  His compositions are marked by a distinctive rhythmic and lyrical quality, along with how effectively he can do the unexpected.  The unrecorded compositions promised to be a significant body of work.

The Makanda Project was formed in 2005 so that this music could be explored by musicians and heard by the public.  Pianist and leader John Kordalewski, who studied and performed with Makanda has, as of 2017, arranged almost 50 of the compositions for a large ensemble.  With new arrangements, and without the opportunity to hear Makanda’s performances of these pieces, the Makanda Project’s approach differs from that of the “ghost bands” that sometimes form to honor the legacy of a great musician.  Whereas those bands essentially revisit the original, with the same repertoire and instrumentation, the Makanda Project is extending Dr. McIntyre’s work in new ways, and has developed its own identity with his compositions as a vehicle. 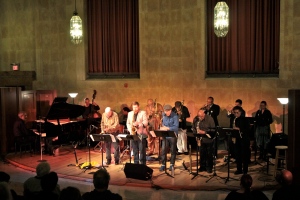 The normal size of the group is 13 musicians: 5 saxophones, 2 trumpets, 3 trombones, piano, bass, and drums.  The exact personnel tends to vary slightly from performance to performance, but the musicians are almost always from among the following:

On some occasions the group also includes dancer Mickey Davidson, or a group of dancers led and choreographed by Ms. Davidson. On other occasions the group collaborates with a guest such as Chico Freeman, Michael Gregory Jackson, Feya Faku, Oliver Lake, Craig Harris, or Ricky Ford, the collaboration involving the guest’s compositions as well as pieces by Makanda Ken McIntyre. The Makanda Project “Multiple Percussion Edition” is a special format that features three percussionists (Yoron Israel, Warren Smith, and Billy Hart or Thurman Barker). The group’s repertoire also includes some works by composers such as saxophonist Bill Barron and South African musician Ndikho Xaba.

The Makanda Project can be heard on a regular basis at the Roxbury Branch of the Boston Public Library, the Bruce C. Bolling Municipal Building, and the grounds of historic First Church, all in Boston’s Roxbury neighborhood.  These self-produced free concerts have a distinct community flavor and reflect the value the group places on making the music accessible on a community level.  Often these events include vehicles for community participation such as live painting, facilitated by Massachusetts College of Art and Design’s sparc! the ArtMobile (Ekua Holmes, director), or performances by community-based youth groups.

The band has also performed throughout the Eastern United States from Washington DC to Maine, and recently completed its first European tour.

Most of the band members are also educators, and the group has presented a variety of educational programs from jazz listening seminars, to improvisation workshops, to panel discussions.

The Makanda Project has been profiled in the Boston Globe:

And in the Bay State Banner: